Securing Canadian Citizenship after a permanent residence status is like achieving pride and respect that does not come with Canada PR.

There are five primary reasons for achieving Canadian Citizenship

A candidate has to go through a struggle to apply for a Canada PR Visa. But even after attaining the PR status, they have to renew their PR every five years, and for that, they must be physically present in Canada for 1095 days before applying for the PR card renewal.

To immigrate to Canada, a candidate must meet all their eligibility for PR in Canada.

But once they achieve Canadian Citizenship and become a citizen of Canada, they do not have to worry about the renewal or eligibility criteria for PR because citizenship certificates are valid forever.

Canada is an employment hub, and getting a job in Canada is not challenging if you are a skilled worker. But some jobs are not available for Canadian Permanent Residents because of security reasons, and government jobs or other jobs are available to Canadian citizens only.

So, being a Canadian citizen means more job opportunities and a much higher income.

There are some situations where permanent residents get deported, no matter how long they live in Canada.

A candidate has to clear the IELTS exams and many other educational qualifications to be eligible to apply for permanent residence in Canada from outside Canada.

On the other hand, Government can repeal the citizenship status of a candidate in very few circumstances. According to Canadian law, an individual’s Citizenship gets carried away only if they have acquired it through false representation, fraud, or because of security reasons, international rights violation, crime, etc.

Only a Canadian citizen gets the right to vote in all the elections held in Canada. They are also eligible to run the Canadian offices and constituents on the issues that affect or are vital to the citizens of Canada.

But even after an extended processing time for Canada PR, a permanent resident cannot get the right to vote or run for a Canadian office.

Immigrating to Canada is not complicated; getting a Canada PR in 8 to 10 months is also not challenging, but a candidate cannot achieve the respect Canadian Citizenship can bring them through Canada PR status.

And suppose a candidate’s native country does not allow dual Citizenship. In that case, they can analyze the advantages and disadvantages of both countries after living in Canada as a permanent resident and then select the passport of the best land.

According to the statistics, around 86% of Canadian permanent residents become citizens of Canada, one of the highest rates among western countries.

When a PR candidate becomes a citizen of the country, it profits both. It gives the immigrant all the pride and rights as Canadian citizens, and they can help the country’s economy to overgrow. 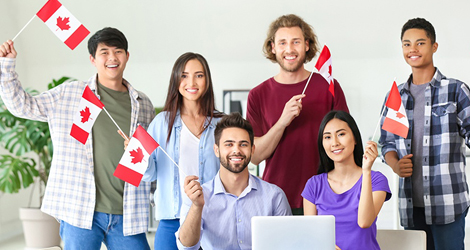